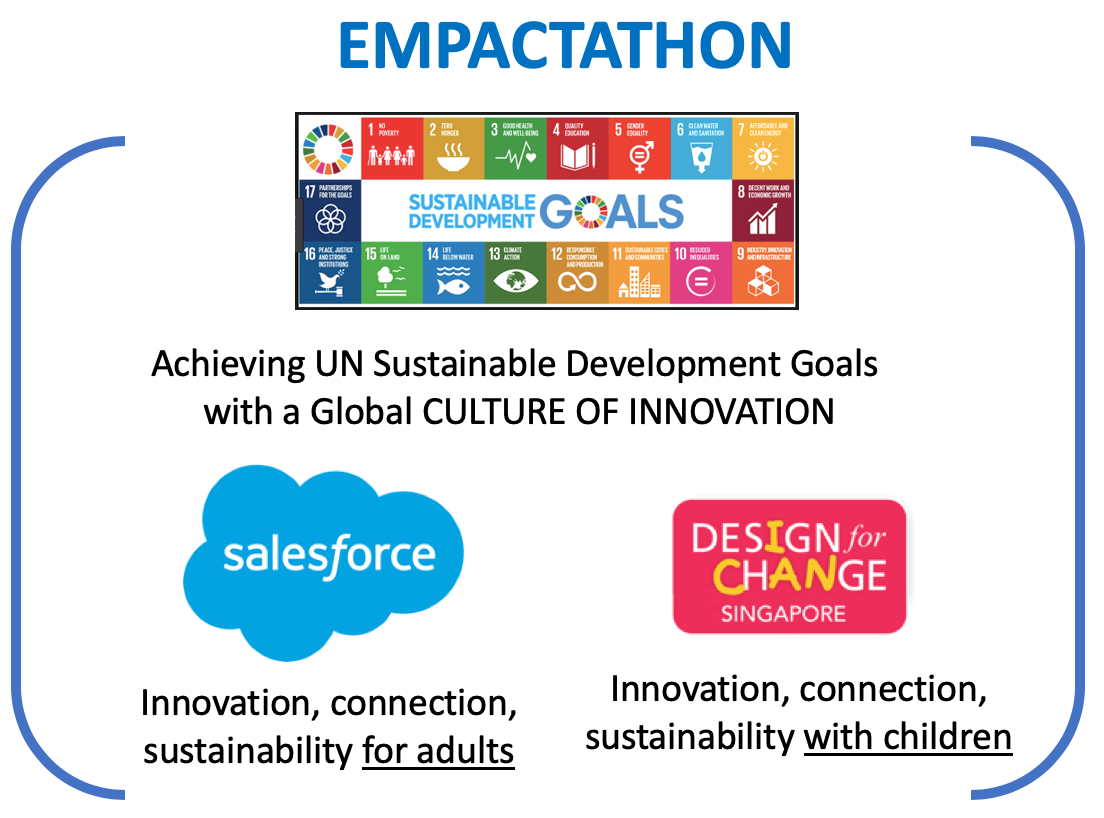 Empactathon, the Design Thinking workshop, conducted at Marina Bay Sands, lived up to its promise of creating an impact through empathy. With a ground breaking intergenerational format, the workshop brought together 45 children from various schools of Singapore and 30 Salesforce volunteers, to initiate a conversation for a better world.

The two-hours-long workshop that teamed kids (superheroes of change) with adults (super forces), was part of the Salesforce basecamp, an event that is held annually for networking, inspiration and learning. They invite the trailblazing Salesforce  innovators to come together, and this year, the 45 young change-makers were included. These young superheroes of change, brought along with them, 12 Design for Change Projects, that addressed 8 Global Goals. Their concerns were on various issues such as, loneliness and lack of mobility in the elderly, lack of interaction among Singaporeans and migrant workers, gender stereotypes, eroding compassion and kindness in society, plastic pollution, inconvenience faced while tapping wallet on public transport etc.

The idea behind this workshop comes from the largest global movement, Design for Change (DFC), that uses Design Thinking to give people an opportunity to express and implement ideas for a better world. Their mission, to empower every child with the ‘I CAN mindset’ so that they are not only aware of the world around them, but are also empowered to bring about the needed change.

By allowing a joint discussion with the adults, DFC, Singapore expanded the belief of I CANto WE CAN. It hoped to break few barriers of communication, bring in new ideas and impact the shape of things to come. And it did. Empactathon on 30thMay, 2019, provided participants of mixed ages, an opportunity to make community solutions more scalable and impactful.

At the end of the workshop, the teams presented their ideas to a jury that comprised of Salesforce management team and judges from Design Singapore and SUSS Head of Service Learning.

I have supported the Design for Change (Singapore) team for the last 6 years. In the process, I have witnessed what children are capable of. And yet, this particular workshop caught me by surprise. It’s because the expanded scope of this programme went beyond seeking just solutions of change. In addition, it also gave both the generations, a new understanding of each other.

When I spoke to the kids at the beginning of the event, I sensed apprehension and youthful awkwardness. Are you nervous, I asked a student. “Yes”, he replied, “a little”. Yet, I watched how their confidence soared when they explained to their adult team memebers, the project that they have worked on. They had the passion of someone who believed in what they were doing. By the end of the session, the students had made friends with their new team members from Salesforce. “I didn’t know how to talk to adults,” a student shyly admitted later, “but I do now. I liked talking to them and listening to their ideas.”

The adults, shared this feeling of bonding as well. Throughly impressed by the young change-agents, they added their own wisdom and inputs to the project solutions. The eventual result was a presentation, that was not only powerful and inspirational, but a complete success in public speaking as well! Kudos to DFC for this philosophy of empowering children, and kudos to organisations like Salesforce for providing such platforms for conversations. The world needs more such conversations for a better tomorrow.

One thought on “Intergenerational Conversations for a Better World”