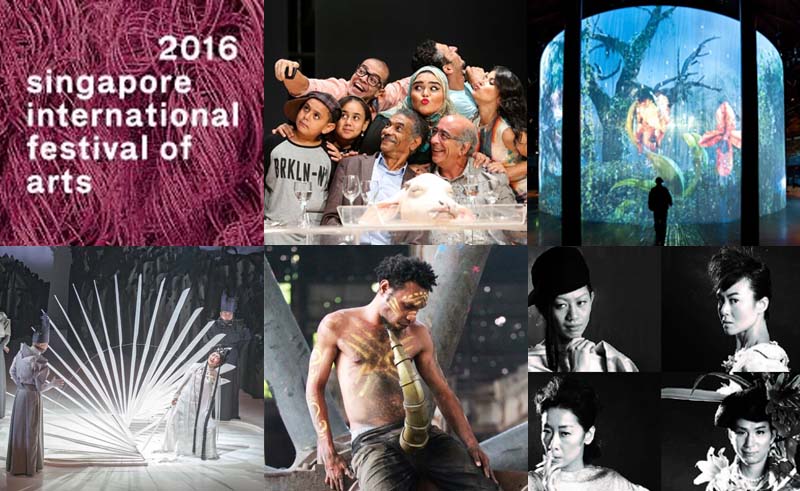 The most exciting words at the press conference were the ones uttered by the Festival Director, Ong Keng Sen. The artists are going to “break the rules,” he said. Sitting in the Blue Room @ 1 Old Parliament Lane, I was instantly interested.  Goes without saying that art forms that communicate, challenge and instigate alternate viewpoints are the ones that successfully serve their purpose. And anything that sets out with the intention of challenging existing norms got to be exciting, both aesthetically and intellectually. I am delighted at the possibilities and absolutely looking forward to the Singapore International Festival of Arts (SIFA) 2016!

Scheduled from 22 June to 9th July, SIFA-2016, is one of the biggest so far. It will showcase 20 productions at the main festival, and 43 programmes at its pre-festival of ideas: The O.P.E.N. (Open, Participate, Engage, Negotiate), a public initiative. The theme is, Potentialities. It’s the “in-between state between Potential and the actual realisation,” says Ong.  Elaborating on the concept, he spoke of  five trajectories in which Potentialities will be considered.

* Innovation: Here artists break the ‘rules’ of the art and push their own limits to explore beyond. This innovative stance can be seen in Ron Arad’s 720 °, which uses experimental form of film visuals.

* New space-time relationships: This can be seen in Fernando Rubio’s Time Between Us, where over 108 hours, audiences will be able to visit an individual in a specially designed house.

* Future visions of the world: Future visions are showcased in productions like, The Last Supper, that describes Egyptian society after the Arab Spring.

* Found potentialities: This includes works like Trajal Harrell’s The Return of La Argentina and In the Mood For Frankie, where Harrell rethinks the relationship between two seemingly different dance forms.

The entire line up of SIFA 2016 can be found at www.sifa.sg.However, personally, I am looking forward to the following ones:

1) The Last Bull: A Life In Flamenco

“Spontaneous and fiery. Sad and beautiful. Seductive and heartbreaking”. The Last Bull: A Life In Flamenco, is an extraordinary love story between one man and the art of flamenco. Written by Huzir Sulaiman and directed by Claire Wong, this seductive play revolves around Antonio Vargas, one of the world’s leading flamenco dancers and choreographers.

I am interested because: I met Huzir Sulaiman, Claire Wong and the absolutely charming Antonio Vargas. As we shared a brief conversation, Claire pointed to Vargas as the man featured on the brochure. “The photo has come out well,” she said. I absolutely agree.

Sardono Retrospective showcases Indonesian artist, Sardono W. Kusumo’s paintings, films and dance choreography as he looks back on what he has learnt from working and performing the traditional cultures and arts of Indonesia in the last 50 years. It includes poetic visual images on film.

I am interested because: Bali’s Kecak dance fascinates me and Sardono Retrospective will show personal collection of re-mastered old film prints that reveal background context of this famous dance.

I am interested because: Having worked with children for the past decade, I am aware and concerned with the emotional traumas faced by children in our society. I am glad to see this topic aired and dealt with openly.

Hailed as one of Singapore’s most talented contemporary artists today, film director and performance-maker Brian Gothong Tan has created ingenious, cutting-edge work in visually stunning spectacles such as the National Day Parade, Youth Olympic Games and SEA Games 2015. Tropical Traumas follows a group of performers who re-enact the wild and exotic expeditions into the steamy Malay Archipelago. It is based on tales told by Sir Stamford Raffles’ wife Sophia Hull and the great British naturalist Alfred Russel Wallace.

I am interested because: Tan puts together a daring, playful blend of cinema and theatre that explores the possibilities of multiple realities, stories within stories and speculative histories.

SIFA 2016 promises to be an event that expands creative sensibilities and pushes the limits.

Digressing a bit from SIFA 2016, here’s a poem that pushes the limit and challenges the existing norms as well. In this case, it strips away the existing images of womanhood and explores new limits. Presenting “Metaphor” by modernist poet, Sylvia Plath, a renegade and a cult figure.

I’m a riddle in nine syllables,
An elephant, a ponderous house,
A melon strolling on two tendrils.
O red fruit, ivory, fine timbers!
This loaf’s big with its yeasty rising.
Money’s new-minted in this fat purse.
I’m a means, a stage, a cow in calf.
I’ve eaten a bag of green apples,
Boarded the train there’s no getting off.

I believe, art should make you think. That’s when it has the power to shape and transform ideas. The artists of our era, both past and present, seem to be doing just that.