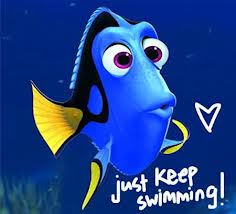 This post will be a bit of a mish mash as I have not written for a while.  The airing of thoughts inside this particular space may not have happened but the thoughts, events and circle of life has continued uninterrupted of course. In the last couple of months, I have gained, lost, struggled, salvaged, fought, slumped, rose, fell and survived…. like everybody else.

As Dory, from Finding Nemo would have said, ‘just keep swimming, just keep swimming’ and I am inclined to agree. After all, Dory said it! Ditzy Dory, voiced by the brilliant Ellen DeGeneres is one of my favourite characters though I am currently under pressure to replace that with ‘minions’ after the success of ‘Despicable Me’. Hmmmm…choices, choices, choices!!!

I am also under immense pressure from the in- house junior reader to read Rick Riordan and compare the book to the movie released a few years ago. I had seen the movie earlier and now I am reading the book. I am not sure if that qualifies me as an expert but this much I know- If I say that the movie is better, I will be plummeted by many young Percy Jackson fans!! More power to the writers!! 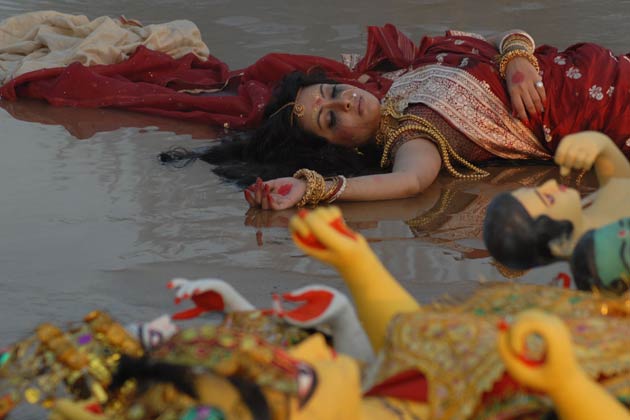 Meanwhile the movie pick this time is ‘Naukadubi’. The scene above gives a fair indication of the depth of this story. I found it soul stirring and captivating from the word ‘go’. Based on Rabindranath  Tagore‘s book, ‘Naukadubi’, the movie is directed by the talented Bengali director, Rituparno Ghosh.  NY times had described Ghosh as a ‘unabashed cross-dresser’ challenging the ‘conservative sensibilities in India’. Ghosh’s genius was unmistakable. Naukadubi, the movie captured nuances that were subtle yet elaborate, and zeroed in to the complexities of emotions with such a mastered hand that each scene felt complete in itself. Of course, capturing Tagore’s stories in to a scene is almost next to impossible, since the revered storyteller had a habit of dressing each emotion with multiple layers, but Ghosh had neared that combination.

His death was unfortunate. At age 49, the late Rituparno Ghosh has left a legacy of brilliant movies. The movie world has been left with one less gifted film maker.

Another unfortunate death has been that of young Glee actor, Cory Montienth, who has also left many grieving hearts behind. It’s another young life lost, another dream left halfway and another reminder that life plays strange tricks. RIP Cory.

Coming back to uplifting moments, my dosage of inspiration has come from the biopic of the runner, Milkha Singh. Singh, who saw his family brutally murdered, lived in refugee camps and went on to hold the world records against all odds. That’s grit, sweat and hard work! While watching the movie, I had this urge to cheer each time, the actor Akhtar ran on the screen as if I was part of a stadium crowd. Love such movies!!!! Another inspiration comes from the music industry, singer-songwriter, Ed Sheeran. Sheeran, it seems had once reached LA, with no contacts other than one poetry night and now the same musician is singing his way to success, fame and money. Against all odds? Maybe not but perseverance and hard work? Definitely! Another reason for mentioning Ed Sheeran is also because he has raised £40,000 for the street sex workers. In his words, “There’s a lot more popular charities that get a lot of attention. And with certain subjects like this they’re often washed over and people don’t necessarily give them the attention they deserve.” Just my thoughts, Sheeran, just my thoughts.

And here I mention my local inspiration, the mother & son team offering a different perspective of children and adolescents with special needs. The mother, Choo Kah Ying  is a writer and an educator and her teenaged son, Sebastien is a brilliant artist with mild autism. Sebastien paints water colours that are vibrant, alive and pulsating with energy. He has been donating 30% of the sales of all of these paintings to ‘A Mother’s Wish’ Campaign and the duo hope someday to overturn stereotypes that cause fear and stigmatisation of people with special needs and mental illnesses. To learn more about AMW or to buy Sebastien’s art, please click here

This month, I am featuring Children’s Cancer Foundation as they get ready for their Hair for Hope 2013 campaign. Do stop by Vivo city on the 27th & 28th of July!

Hair? Well, it can come and go but hope needs to stay forever…. whatever be the circumstances. As my dear Dory would say,