I promised in the last post to talk about the lovely people who give back to the society in simpler and smaller ways so, here I am talking about people who pay it forward. We are not talking of anything fancy, mind you! No big donations, no supreme sacrifices but just small discreet deeds, a few polite gestures and a lifetime full of good will earned in return. I believe in such small meaningful acts and I am so proud to know those who act on it too….the ones who pay it forward.

For those who are wondering, it’s a phrase coined by Lily Hardy Hammond in 1916. If I were to explain it simply, it would be something like, ‘Want to return/ repay my good deed? Do something good for someone else!’ It’s when you ask the beneficiary of a good deed to choose another benefactor for their own good deed, thus starting a ripple effect and creating a wave of people who pay it forward. That way you ensure that the good deed you started continues spreading out in to the world and it reaches more people in a shorter time. More good, shorter time….that’s what I call efficient! Catherine Ryan Hyde used this phrase as a title of her book and later, an eponymous movie was released in 2000. So,  paying it forward is cool now. No, not just because of the book or the movie but because, it is resonating with more people. It has generated a mass appeal and groups are being formed to promote it.

There’s a Global Pay It Forward Movement in the USA and even a Pay It Forward Day worldwide on April 25th! In Singapore, it’s a part of the Singapore Kindness Movement that says, ‘Imagine if each of us lent a helping hand to three other people. In turn, each of them helps 3 more people. This means you have impacted 9 people in total. Through the rippling effect of kindness, you could have indirectly helped 59,049 people!’  That’s a big number indeed! Today is an important day for them as Singapore celebrates its Kindness day. Hopefully, the movement will catch on and more people give back to the community.

My friend, Elaine is one such donor. Passionate about Tennis and a fighter in her own right, Elaine knows a thing or two about overcoming odds, so when she decided to pay it forward, she chose a cause that was close to her passion, Tennis. She requested her friends to donate her birthday money/ treat to Soundball Singapore (https://www.facebook.com/SoundballSingapore), which is a Tennis organisation, specially adapted to the needs of the visually impaired. It is played with a softball that rattles. The volunteers there aim to use Soundball to inspire the visually impaired to strive beyond their perceived limits and hope to promote further awareness of this sport, with a goal for it to be included in the 2020 Paralympics.

Walking a similar path are our young donors, Dhruv and Tiara, who happily donated their birthday money to people who needed it more than they did. It’s heartening to see a rise in such donations which makes me want to ask Indian industrialist, Vijay Mallya, very politely  of course, if he should have done the same? Those who don’t know, Mallya has donated a substantial 3 Kg gold to a temple in India for his 57th birthday. 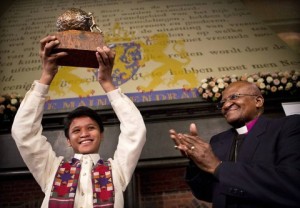 We agree, donating a whopping 3 kg gold has an impact. It makes a statement but then, impact can be made in many other ways. Take the example of the homeless Filipino boy, Chris Keisz Valdez who paid it forward, made a statement and with such pizzazz! The 13-year-old won the International Peace Prize for improving the lives of fellow street kids and inspired a generation through his acts.

So what makes people give back with nothing expected in return?

No, don’t even try to answer that question because the question is wrong. Who said there’s nothing in return? Haven’t you heard, what goes around, comes around? Even if it doesn’t, the happiness received at the end of a good deed is so phenomenal that nothing else matters. If you have never tried it, you will never know. Pay it forward and see for yourself…..

Stumbled in to splendour, featuring ByLoom