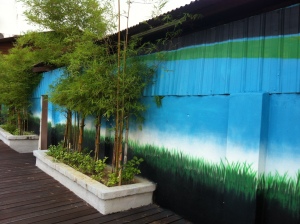 Malacca or Melaka, located in the southern Malaysian Peninsula, is a UNESCO World Heritage Site. Legends say that the city was named by Sri Majara, the last Raja of Singapura, after the Melaka tree that provided him with shelter during a hunting trip. He considered the place auspicious and true to his belief, the city that flourished thereafter went on to become a major port along the spice route and became a unique community of Baba Nyonya (Peranakan Chinese) intertwined with Malay culture. Malacca formed an important link between the east and the west. Even to this date, Malacca remains a custodian of history and an important tourist destination that sports the proud slogan, “Melawat Melaka Bererti Melawati Malaysia.” Translated, it means, “Visiting Malacca Means Visiting Malaysia.”

Malacca is a great city to combine with a Singapore trip since the distance between Singapore and Malacca is over three hours by road and luxury buses are available from Singapore. The city can also be an interesting addition to an elaborate Malaysian travel itinerary. It’s a ninety minutes drive from the Kuala Lumpur airport and if you are travelling from K.L., the journey is about two hours. Finally, those who enjoy train rides, can take trains from Kuala Lumpur to Malacca too.

The city boasts of a creative charm, undulating between subtle art and gaudily displayed grandiose that demands closer inspection, almost like an overt display of caprice by a dame who knows her worth and perhaps, rightfully so. History, thankfully, has been kind to the city, adding interesting layers of the Malaysian culture with hints of Portuguese, Dutch and English influence. These influences form an inherent part and can be seen in its abundantly decorated walls, restored buildings and even in its dilapidated fort. Similarly, ingenuity is flaunted by the themed restaurants, huge wall graffitis and the embellished trishaws that carry you through the streets with their blasting music and their overt presence.

Malacca has much to offer the tourists. From its A’Famosa Fort, Sultanate Palace, Butterfly & Reptile Sanctuary to its temples, churches, shops, charming river cruises, theme park and the zoo. It’s a multidimensional display to which a walking trail by the river must be added. An evening walk along the river, as I discovered, is an unusual treat with art work displayed on buildings and houses along the river banks. The scene creates an illusion of an overstretched canvas, resplendent with imagery. A visual treat indeed!

Equally fascinating, is a piece of history, that can be found in Number 8, Hereen Street. Number 8 on Hereen is a restored Dutch House, where the guide, Mr Colin, gives a fantastic verbal tour to those who are interested. If you are polite and interested enough, he may even let you pose with his three hundred year old, Dutch nail. If not the nail, then his generosity will definitely leave you with a smile.

Hotels are aplenty in the city. A comprehensive listing is available on the internet. (I personally prefer the tripadvisor website). For those looking for a charming place to stay and for those who are besotted with the need to surround themselves with all things beautiful and cultural, here’s a recommendation. Try The Courtyard at Hereen. This boutique hotel boasts of fancy- sounding awards, like ‘Malaysian Institute of Architect (PAM) Award for Colour on Buildings 6 ; Category’. I will certainly vouch for the decor and for the hospitality extended here.

For the gastronomically inclined, food is plentiful in this city and delightful as well, but if you are an art lover along with being a foodie, then welcome to my world and allow me to recommend ‘Calante Art cafe’ on Jalan Hang Kasturi and ‘Geographers’ at Jonker Street, to satisfy your taste buds and quench your artistic thirst at the same time. Both the places will have you craning your neck to look around and to catch the beauty of the space you are in. The ubiquitous Indian restaurants in Malacca also ensure that those craving Indian food are not disappointed.

Finally, no place is worth mentioning without mentioning the people and so the locals shall be mentioned here. In fact, the locals of Malacca need more than just a mention. They are incredibly affable, warm and welcoming. They ensure that the ‘feel good factor’ of Malaysian holiday lasts and lasts. Malacca is also a place to show and not to just tell, and so keep your cameras handy. Opportunities arise at surprising places. It is a place that inspires creativity, conversation and cravings for yet another surprise round the corner.

(This article was first featured in Women’s Era Feb 2013)

One thought on “The Malaccan surprise.”